The Kytons team love being part of the South Australian spirit at the Royal Adelaide Show. So we’re back again for our 13th year in 2019 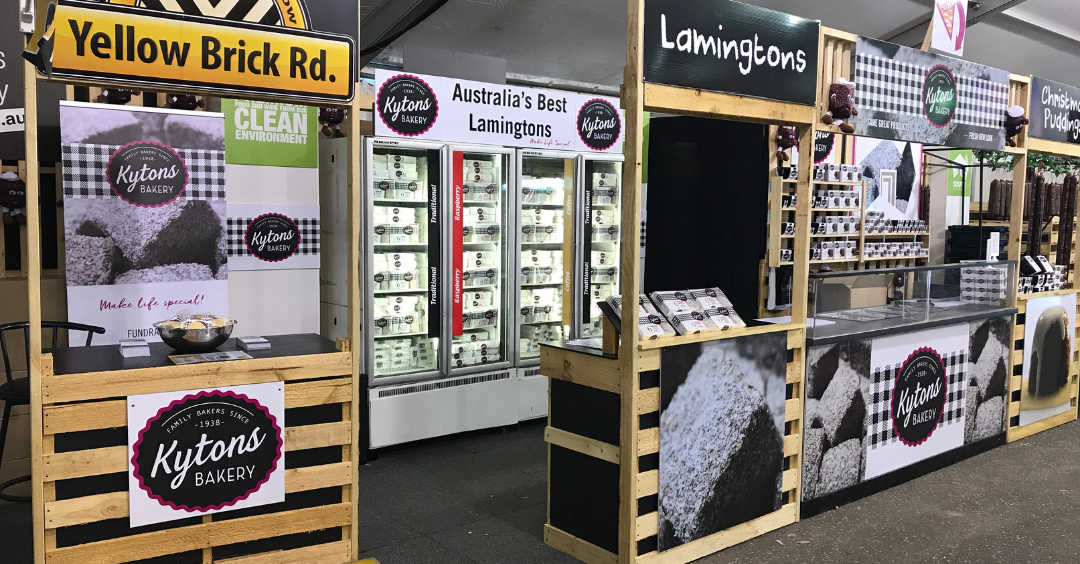 “I love our stand at the Royal Show” says Kytons owner Sharon who has been on the stall for all 13 of those years, “yes it is long days, but it is a wonderful opportunity to meet the Kytons lamington lovers and to see what else businesses around SA have to offer. Add that to the sights and sounds of the sideshows, bands, animals and entertainment and it’s hard not to get excited when you walk in the gate”. Kytons has been baking in South Australia for 81 years, so we’ve certainly been a part of that South Australia’s food culture for a long time!

Kytons stand is in the Taste SA Pavilion & is always big and bright and full of surprises and has won first prize for the Taste SA pavilion twice in the last few years. We always have an interesting competition to engage passers-by. These have included asking show goers to help choose a new lamington flavour which then became part of the Kytons range and the most popular ever was when we asked show goers to guess how many lamingtons were in a giant fridge. “A lot of effort was put into people trying to work that one out” says Sharon “people, including engineering students, had calculators and rulers – it was fun to watch.” Sharon says Kytons has something special planned for this years’ stand – a giant working ferris wheel built from scratch by Kytons owner Darren and his two teenage sons.

The 7 foot tall mascot Larry the Lamington is a popular figure on the Kytons stand – whether for a photo while he’s “resting” or a high-5 or a photo when Larry magically comes to life for the daily mascot parade and stand appearances. He loves to dance, especially along to the South Australian Police Band in the mascot parade.

“The Royal Show also offers us a great opportunity to collaborate with the RAHS itself and other SA businesses at the Show. We’ve been part of the legendary Yellow Brick Road for the last couple of years and are part of the bountiful Foodland Gourmet Goodie Bag that’s full of SA produce. Plus we wouldn’t get through our day without icecream from the Bush Tucker Icecream or Golden North and some tasty food from Kings Way” Sharon laughs. Plus Kytons has won many awards at the Show over the years – Best stand in Taste SA, twice (and a close second last year) and Professional Baking Awards for lamingtons, Christmas Pudding and Vanilla Slice. Kytons also sponsors the “home cook” version of the lamington baking competition – perhaps supporting the Kytons lamington makers of the future?

Royal Show runs from Friday 30th August until Sunday 8th September and you’ll find Kytons along with many other South Australian food companies in the Taste SA Pavilion near the dairy hall, where you can taste and buy lamingtons or Christmas Pudding, chat with the Kytons staff, see the fantastic working ferris wheel or have your photo taken with Larry Lamington.