Family behind Kytons build a working ferris wheel for the Royal Adelaide Show as the Show’s ferris wheel celebrates 50 Years. 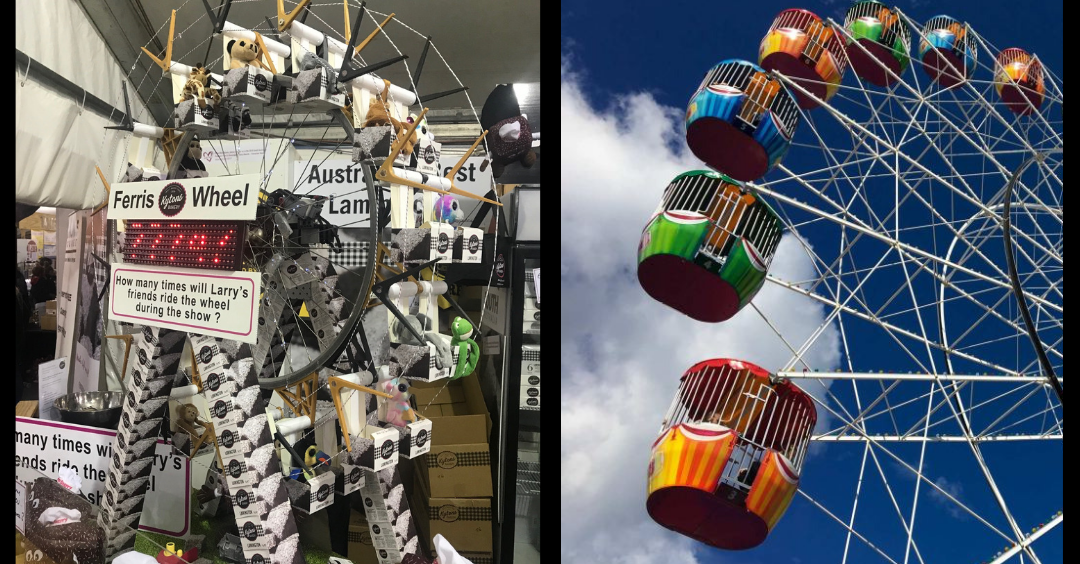 The star of Kytons Bakery’s Royal Show stand in 2019 is a giant, full operational lamington inspired ferris wheel.The idea of building a ferris wheel came about several months ago at a family dinner table conference to plan the Kytons show stand for this year and the Suttons had no idea that their family project coincided with the 50th Anniversary of the Adelaide Royal Show’s own giant ferris wheel. And while the continually turning wheel decorated with lamington boxes and loaded with a crew of fluffy toys adds life and vibrancy to the Kytons Bakery stand in the Taste SA Pavilion, it’s the family participation behind the wheel that is the real story.

Kytons has been owned by Darren and Sharon Sutton since 2003 and part of the Kytons team these days are also their two sons – Jamie, 13 and Josh, 18. While neither of these boys have an interest in the baking side of the business as a long term career, they are certainly happy to put their love of electronics, designing and creating to work and together with dad Darren have created this amazing wheel.

Each year the Kytons stand features a quirky competition to attract attention, engage the public and add something special to the stand (the Kytons stand has twice won best stand in TasteSA). What began as a thought bubble from Sharon – “what about a ferris wheel”, has resulted in two months’ worth of brain storming, designing, 3D printing, shopping in unexpected places and electronic programming to create the wheel.

“It has kind of taken over our family life for the last couple of months” says Sharon. The build started with a search of a scrap yard for a suitable second hand bicycle wheel frame that ended up being donated by South Coast Cycles. “Both of my boys are talented when it comes to technical drawing on the computer and they designed the supports and holders for the lamington box ‘gondolas’. Fortunately, Josh also saved and bought his own 3D printer a couple of years ago and that has been running almost continually for the last month printing all of the components. The boys have also done all the assembly and programming of the electronic components.”

Kytons mascot Larry the Lamington adorns the centre of the wheel and “Larry’s friends” – a collection of small stuffed animals were purchased on a recent visit to the Monarto Zoo’s gift shop. “Like I said this wheel has crept into everything we’ve done lately” laughs Sharon.

Finally the wheel features a large digital display –programmed by Josh, 18 who is enrolled to begin electronic engineering at university next year. The display is the key to Kytons Show competition this year – “how many times will Larry’s friends go around on the ferris wheel during the show?” The display only shows the last two digits of their journey – the exact number is up to show goers imagination and calculation abilities to work out. The closest guess will win a year’s supply of Kytons lamingtons – sure to be popular in any household.