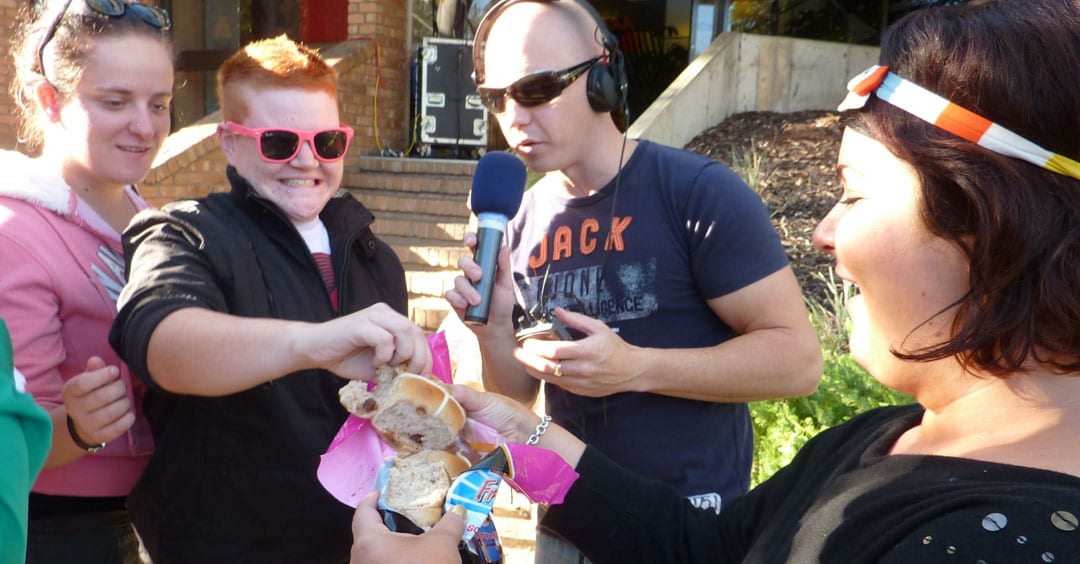 A product  was originally developed as part of a radio station Easter stunt has become a very, very successful coming together of two South Australian food companies, Kytons and Robern Menz, to create an Easter delight.

In 2012, SAFM ran a competition to find a new, unique flavour of hot cross bun for Easter.

After some disastrous ideas (we know ‘cos Kytons volunteered to bake them and taste them), including bacon & eggs, peppermint made with crown mint, and chunky carrot, none of those worked well I can tell you, someone suggested putting mini-FruChocs into a hot cross bun. Now that was a winner.

Only 1000 packets were made as part of an exclusive radio promotion and they were only available at SAFM (then on Greenhill Road) on Easter Thursday morning.

By 8am hundreds of people were queued down Greenhill Road and there were even a few brave souls who CAMPED at the front of the line overnight to be the first to try them.

It was a crazy, crazy sight and discussions were had that morning between Kytons and Robern Menz about the need to make this into a product available to all of South Australia.

Fast forward ten months and after lots of tweaking and trial batches between the two companies, the Kytons Menz FruChocs hot cross bun pack was launched into Foodlands and as part of Kytons fundraising drives.

We could barely keep up.

Thousands and thousands of packets were baked every day and they just flew off the shelves.

The Kytons Menz FruChocs Hot Cross Bun has become an important part of Kytons Easter range and an integral part of many South Australian’s Easter memories.

I have friends who take them camping every year and toast them on the barbecue on Easter Sunday morning, so the chocolate melts and the bun itself has a touch of char. Yum!